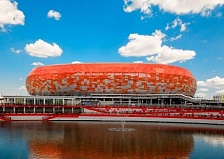 Mordovia Arena became finalist in the best football arenas of the world built in 2018 competition. Out of 27 participating stadiums 3 other Russian arenas also ended up in top ten after the viewers’ voting. They are the stadiums of Samara, Rostov and Volgograd.

Head of the Republic of Mordovia’s press service stated that first round consisted of viewers’ voting on StadiumDB.com. The voting in the second stage will be held by expert jury of three architectures. There will be three main criteria: architectural value, functionality and innovations.

- It is very joyful news for us. Being one of the 10 best sport arenas of the world built in 2018 – is a great achievement – said Head of the Republic of Mordovia, Vladimir Volkov. – Experts rate stadiums based on many parameters. Among them: construction quality, architecture, comfortable location in the city, comfort for the spectators and players. Mordovia arena held several Russia Football World Cup 2018 matches. I reckon, this fact was also considered.