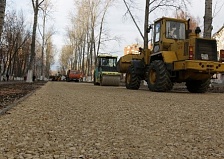 Mordovia closed the gap between its competitors in the Safe and High-Quality Roads national project. Today, the region is one of the top thirty regions in terms of road repair workload: all of the work planned for this year is almost done.

This is what the head of the Republic of Mordovia Vladimir Volkov and the State Duma deputy from the region Vitaly Efimov discussed during a working meeting.

By the end of the year, it is planned to repair about 150 kilometers of the road network in Mordovia and eliminate two places of traffic accident concentration in Saransk. More than 2 billion rubles were provided for these causes in 2019. Today, a big number of objects has already been put into operation, the rest are very close to being ready.

The region is actively preparing for the implementation of the national project next year. Design and planning estimates are being prepared on all projects; tenders to determine the contractors will be announced before the end of December.

Within five years, as part of the Safe and High-Quality Roads national project (SHQR), 1,100 kilometers of highways will have to be repaired in Mordovia. More than a hundred kilometers of them are in the Saransk city agglomeration, which includes Ruzayevka, and nearly 970 kilometers are in the countryside. The share of highways that meet regulatory requirements will almost double, and the number of danger zones will decrease by 2.5 times.