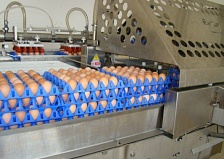 The modernization of the enterprise for deep processing of eggs in the Mordovian monotown of Ruzayevka will be completed in the fourth quarter of this year. As a result, the plant's production capacity will increase by 30 percent, and the export rate will reach 250 tons.

In December 2019, the Monocities Development Fund issued an interest-free loan to the enterprise in the amount of 110 million rubles for the implementation of the project. Part of the funds was spent on the construction of the building, another part – on the purchase of machinery and special equipment. The total investment in the project exceeded 145 million rubles.

As a result, the company will be able to annually produce about 2.4 thousand tons of frozen egg melange and about a thousand tons of eggshells. The packaged shells will also be on sale. They can be used as animal feed and as a natural fertilizer for the soil.

In addition, the increase in capacity will allow the Ruzayevka enterprise to increase exports.

“By the end of the year, we plan to increase the share of production exports to 250 tons. At least 120 tons of egg melange will be sent to Ukraine, Belarus and Kyrgyzstan. The Monocities Development Fund helped us with this,” – the company explained.