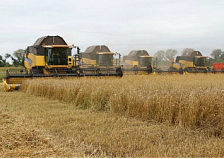 The implementation of large investment projects has become the basis for the growth of the processing enterprises of Mordovia. As the Head of the region, Vladimir Volkov, stated at the celebration of the Agro-Industrial Complex Workers’ Day, the investments into the agriculture of the region have exceeded 65 billion rubles over the past five years.

New projects have been implementing over the past year despite the difficulties that the economy faced during the spread of the coronavirus infection.

The Avangard poultry farm has built a new housing for 130,000 poultry. The Ruzovo enterprise has implemented the project with the support of the Monotowns Development Fund. A new housing and treatment facilities were built. It will help increase the production capacity of the plant by a third. The production of these two enterprises of Ruzaevka was included in the list of “100 best goods of Russia” this year.

A great work on the modernization of the production is being carried out at the Norovsky meat-processing complex, Romodanovosakhar (the Romodanovo sugar) and Teplichnoye (the Greenhouse) enterprises.

A new greenhouse complex has opened in Kadoshkino in September. 560 million rubles were invested in its creation. Six new varieties of roses have been planted there. Those varieties have never been grown in Russia before.