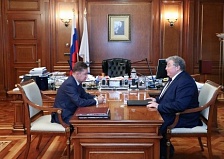 The level of gasification in Mordovia at the start of this year was at 97.6 percent, in rural areas it was at 83.8 percent. In comparison, the average indicators for Russia are 68.6 and 59.4 percent respectively.

These figures were presented during a meeting between the head of the Republic of Mordovia Vladimir Volkov, and the chairman of the board of Gazprom PJSC, Alexei Miller.

Alexey Miller and Vladimir Volkov commended the progress of the implementation of the roadmap for expanding the use of high-tech (including import-substituting) products of Mordovian enterprises in the interests of Gazprom. Over the past few years, equipment purchases have grown significantly.

Gazprom invested 850 million rubles in the development of gasification in Mordovia from 2002 to 2018. 12 inter-settlement gas pipelines were built thanks to that. As part of the Gazprom for Children program, there were multi-purpose sports grounds built all over Mordovia. The company co-financed the construction of the Water Sports Palace and indoor football arena in Saransk.