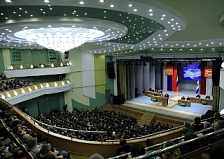 After modernization the only Russian factory for the industrial production of optical fiber in Saransk managed to double their production up to 4 million kilometers per year. After the completion of the second stage of the plant, this figure will grow up to 10 million kilometers of fiber annually.

This was stated by the head of the republic of Mordovia Vladimir Volkov. In a message to the deputies of the State Assembly of the Republic of Mordovia, the leader of the region spoke about the implementation of the plans on creation of a closed cycle for the production of telecommunications fiber in Saransk. Today, the company is able to satisfy more than a half of the needs of the Russian market. However the blanks for the manufacture of products – preforms – have to be imported from abroad for now. Because of this, the cost of Saransk fiber remains high.

The project is planned to be implemented together with partners from Japan. There will be over 10 billion rubles in investments.

“Technopark-Mordovia together with the Fiber Optics Research Center of the Russian Academy of Sciences must do everything for the perfect operation of the fiber optics engineering center and organize the chain of optical fibers and optoelectronics production in Mordovia fast. The entire chain starting from creation of a technology for the production of high-purity quartz materials to the manufacture of devices and systems based on fiber optics”, – said the head of the Republic. – “Also, we should pay special attention to the creation of a center for making optoelectronic instruments and also to the development of an innovation planning center.