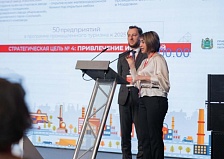 The final event of the ASI Accelerator was held in the Kaluga Region. The teams of the subjects presented 16 regional strategies for the development of industrial tourism created during the training program at the industrial site of the Bosco Manufactory.

The Republic of Mordovia took the award in the nomination «Industrial Travel». It is known that during the Accelerator, several enterprises joined the work of the regional team that wanted to organize industrial tours, among them: «RM Rail Ruzhimmash», JSC «Biokhimik», «Cheese factory «Ichalkovsky» and JSC «Mir Tsvetov».

Over the past year, 2.9 thousand people visited various plants and factories in Mordovia. As of April this year, their number is 1.1 thousand. It is planned that in 2022 the number of tourists who visited the enterprises of the region-13 will be 5 thousand, and by 2025 their number will increase to 15 thousand people. By the same date, the number of enterprises participating in tour programs should be 50.